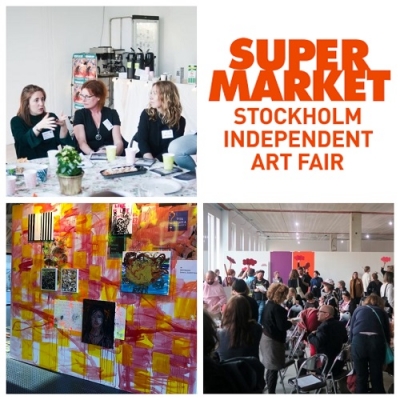 I arrived to Skärholmen /Stockholm Meeting expended program and there was Speed networking. Speed networking is a quite interesting method of getting to know each other and eachother’s space. There were two lines of people in front of each other and every 5 minutes a person from one line passes the next seat to meet a new person. I’ve met Ateljé SKHLM (Stockholm, SE), Konsthall Kåddis(Umeå, SE), Tidal Flow Art (Athens, Greece).

There was a round table meeting and in the meeting with a group of 9 people we discussed self reflection and self critism in the field of arts. The meeting was moderated by Alice Máselníková. This session started by introducing yourself and your organization and the topic has been proposed by the moderator. There was artists/art workers from Amore ( Basel, CH), Flat Octopus (Stockholm, SE), Galery Lokomotiv (Örnsköldskvik, SE), Celsius Projects (Malmö, SE), Betweeen Us (Gent, Belgium), Altán Klamovka Gallery (Prag, Cehzrepublic) , Bierumer School (Bierumer, Netherlands) and other local actors from Stockholm. It was a good method to go deep in a round table that everyone was getting their turn on a row and telling their ideas about the theme.

Then we visited the booths of the exhibitors and we learned what they were presenting.

In the end of the day we’ve seen the performance of Daisuke Takeya on the booth of Candyland (Stockholm, SE).

Day started with a meeting to get to know each other in the meeting expended program. It was moderated by John W. Fail and Lucie Gottlieb. We made small groups of 2 people and the aim was to get to know your partner and present them instead of yourself. There were the meetings expended participants.

Then we all participated Art Shots 1. Art Shots I is a two-part series of short presentations in pecha-kucha format by Supermarket’s exhibitors and Meetings Expanded participants. Each participant presents in ten minutes and ten images their project or initiative, delivering various perspectives on the Swedish and international artist-run scene.

At 4pm on the Talks & Performance Stage I presented “future has desires survey” with Zeynep Okyay (PASAJ-Istanbul). The talk was concentrated on collective working methodologies.

13.00–14.00 We visited IASPIS. We had the tour of the artists-in-residency studios and we  met with the staff. IA SPIS is a partner of Supermarket 2022 – Stockholm Independent Art Fair. It is a very prestigious program in the field of contemporary arts; the Swedish Arts Grants Committee's international program for Visual and Applied Artists.

Between 14.30–16.00 we walked in the district of Östermalm and visited SKF/Konstnärshuset: Konstnärshuset (literally Artists' House) is a building owned by the Swedish Artists Association (SKF – Svenska konstnärernas förening) and is used as an art gallery. We visited the exhibition Portionsavund with artists Maria Toll, Hans Åkerlund, Ida Persson, Petter Rhodiner, Gunnel Boman curated by Ashik Zaman and Alida Ivanov. Then we visited Misschiefs Takeover. It is a transformed former laundry room into a pop-up gallery that is featuring contemporary female designers. The nature of their work at the intersection of design, art, craft, and performance. The exhibition we visited is organized in collaboration with Cecilia Hillström Gallery and features four outstanding women artists and designers: Sara Szyber, Lotta Lampa, Anna-Karin Rasmusson and Linnea Rygaard.

Between 16.30–17.30 we visited Index – The Swedish Contemporary Art Foundation

We met with Index staff and we had a tour of the exhibition by artist Linnea Hansander. Index has a history of more than 40 years and has been extremely important for the artistic context in Stockholm and the art world of northern and central Europe.

After the dinner with CC Gallery/ Malmö artists between 21.30-23.00 we visited Candyland/ Project space in Stockholm. In Candyland we had met the cofounder of Supermarket, Andreas Ribbung and we had a tour of their current photo exhibition by Italian Photographer Sandra Lazzarini.

Between 12.00–13.00, we listened the talk of Ephemeral Care PUBLIC TALK with Joe Rowley (UK/SE) & Giulia Busetti (IT), Ephemeral Care is a transnational research group with a focus on ethics, practice and structures in artist-run initiatives. They introduced their platform, some their current projects.

We had a tour with the exhibitors.

We visited cultural initiative of the neighbourhood which is called Kummelholmen. We met Torbjörn Johansson, co-owner of the space, and had a tour in the exhibition. It is a former power plant located in Vårberg, Kummelholmen offers a unique cultural meeting place with both local, national and international connections.

At 17.00 we had a “therapy session with a drink With Alice Máselníková (CZ/SE), Creative Director, SUPERMARKET – Stockholm Independent Art Fair” We discussed around the questions of -Why do I hate the art world? What bothers me in the artist-run scene?Are all curators douchebags? Are artists even worse? What on earth am I doing here playing with my paint brush? Can’t I just relax and enjoy art? How can I improve my art life? It was an interesting meeting that each person was talking when they had the stress ball.

Art Shots bring together international artists, galleries, art professionals and the audience. There were five speakers, each with only ten minutes and ten images to deliver their presentation. Intense and visual; you will hear, see and discuss the best on offer from the contemporary artist-run projects.

Between 14.30–15.30 there was a talk about International Artist Exchange Programmes – Pragmatic Advice and Strategies, with Max Presneill (UK/US). We made a round table discussion of learned strategies for successful international exchange. Starting from a pragmatic position which relates to budgetary limitations, shipping tactics, exchange structures, and making the most of an opportunity, this session will share knowledge and suggest routes that will help your exchange flourish.

MORE THAN THE PROGRAM

Based on the interest of We Do Fablab I’ve met gallery Qwerty (odense, Denmark), Galleria Sculptur (Helsinki, Finland) and I’ve recorded short interviews with them. They were really on the scope of We Do Fablab’s work. I’ve presented We Do Fablab and we talked about possible collaborations. I’ve also seen the works of Tegen2 (Stockholm, Sweden), Digital Museum (Malmö,Sweden), Galery Lokomotiv (Örnsköldskvik, SE) that they were mechanical works.

Whomever I’ve met I’ve also presented the visitcard of We Do Fablab and I’ve talked about its activities.

What will be the benefits of We Do Fablab from these meetings?

This year there were no workshops with the children of 5 to 11 years old, so I could not participate any workshops and do either help or do observation. Instead I did lots of networking and talked to people tried to build up ones for further projects mixing art and technology.

It was great information exchange and many types of solution on either organizational issues or creating/realizing of art projects. There were many different people all over the world from Canada till Japan (including many states of Europa), so to hear how they work and which specific conditions was very interesting.

I was the second person from Italy (there was a speaker from Milan but she could not arrive because of health issues). One of the meetings was moderated Italian by Sweden based curator.

Supermarket was mainly a networking platform for many artists, creators and makers. There were many meetings that I participated were also different discussion platform. If We Do Fablab would like to be a hub in networking and gathering some people together there were may ways to integrate people to each other some of these methodologies can be use. Like speed networking is a very fast way to connect people to each other, We Do Fablab even with its members can do a session like this. Also discussing on some themes and collaborations in between associations in Omegna it can be a nice way of interaction.

How the art is used for robotics?

There were some example how the robotic technology was in arts, we had seen one art booth is completely dedicated to robots. We are in contact with them.

Networking for We Do Fablab can be interesting if any of the members would like to improve projects in the field of arts.